Focus exhibitions position
paintings in a larger context
inspiring conversations
& creating connections
between the past and the present. 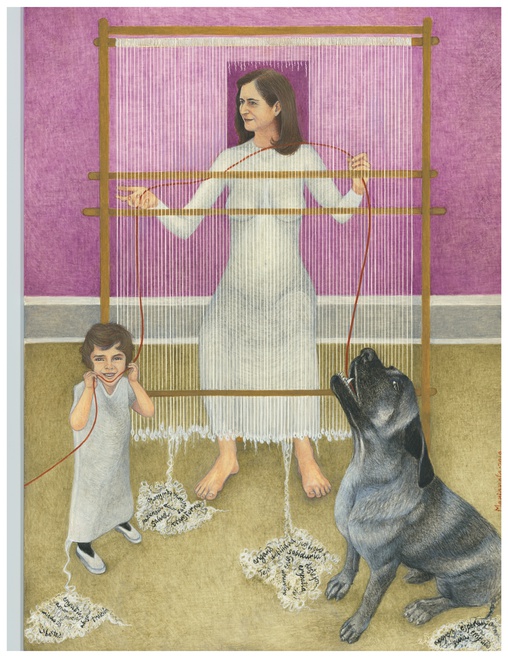 This will be the third in the Timken's popular summer series featuring local artists-in-residence. Following the success of Bhavna Mehta (2018) and Roman de Salvo (2019), we have invited Marianela de la Hoz to produce new work within the museum during the month of August. De la Hoz is an admired painter whose work has been displayed in museums in Mexico and the United States. For the Timken, she proposes to complete a series of small-scaled works loosely based on the narrative of Penelope, a key character in Homeric myth, who uses weaving (and unweaving) as a clever strategy for delaying the pursuits of her suitors until her husband, Odysseus, returns from war. 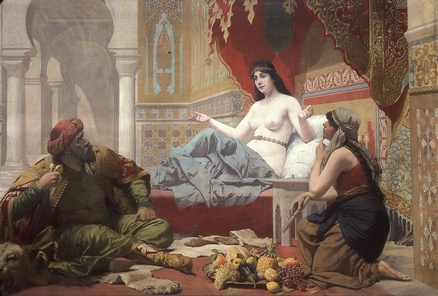 This exhibition explores the variety of strategies used by artists in both Europe and the United States to depict women. Both mythological scenes and everyday life are depicted in these paintings all of which date from the late 19th- through the early 20th century. The collection of Sandra and Bram Dijkstra is known to connoisseurs for its quality and its strong focus on academic works from the fin de siècle.  This project was conceived as part of a course taught at the University of San Diego by Timken’s Director of Curatorial Affairs, Derrick R. Cartwright, Ph.D., during the fall of 2019 and includes the input and interpretations of young scholars as they approach the enduring qualities of these complex, compelling representations. Click here to read about the exhibition in the words of Bram Dijkstra.

Fall Exhibition: Masterpieces of Italian Drawings from The British Museum

The Italian Renaissance and Baroque periods will come to life as the Timken Museum of Art in Balboa Park, San Diego presents Masterpieces of Italian Drawings from The British Museum, September 6 through December 15, 2019.  The goal of the exhibition featuring the themes of birth, death, and resurrection is to share with the public some of the greatest drawings of these famed art historical periods, many of which are being seen for the first time in San Diego.  The exhibition is an ambitious first-time-ever collaborative effort among the Timken, University of San Diego (USD) and The British Museum in London. Since the Timken and USD have worked together previously, the leadership of both institutions felt that their closeness and parallel missions—a commitment to European art of the highest quality—have made this a natural project on which to work together.  The entire collection from The British Museum will include 54 drawings and prints, many of which will be on display at the Timken, featuring such 16th-century masters as Pamigianino, Andrea del Sarto and Agostino Carracci and the 18th-century artists Luca Giordano and Domenico Tiepolo.  The balance of the drawings will be on display at the USD Galleries. 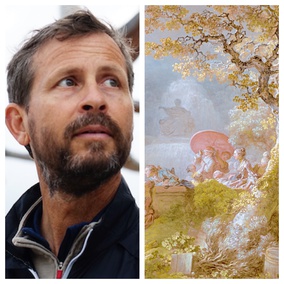 Roman de Salvo is a contemporary American sculptor whose work infuses the every day with surprising effect and intrigue. His art is characterized by the inventive use of ordinary materials and objects often involving energetic phenomena such as wind, water, fire, electricity, and audience participation. As part of the Timken Museum of Art’s summer artist-in-residence program, de Salvo will create the Electric Picnic sculpture based on the picturesque, Rococo-era, Blindman’s Buff (1775-80) by Jean Honoré Fragonard, which is part of the Museum’s permanent collection. De Salvo’s residency starts at the beginning of June, and the Electric Picnic sculpture will be on display at the Timken June 28 through August 25, 2019. June 27 - Installation Opening Reception - Call 619-239-5548 Ext 100 for details. 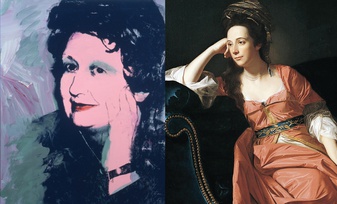 Metonymies: A Dialogue with Twentieth-Century Works from the Sonnabend Collection

Ileana Sonnabend (1914-2007) was a gallerist and connoisseur of twentieth-century art.  Through her legendary galleries in Paris and New York, Sonnabend helped establish the global reputations of many young artists: Andy Warhol, Jasper Johns, Robert Rauschenberg, Roy Lichtenstein, and Jeffrey Koons, to name only a few. Like the Timken’s founders, the Putnam sisters, Sonnabend brought a remarkably independent perspective to her personal collecting practice. Upon her death, she left an invaluable trove of modern masterworks to a foundation that bears her name, as well as to her family.  Metonymies—from the Greek word for substitution—exchanges well-known works from the Timken’s permanent collection with unique objects from the Sonnabend Foundation Collection and Antonio Homen. This exhibition represents the first time that these works from the Sonnabend Collection are being shown publicly in San Diego. 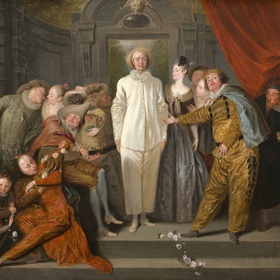 The Timken Museum of Art is proud to present its upcoming fall exhibition Rococo, Rivals and Revivals. Composed of 12 objects, paintings, drawings and prints, featuring regional, national and international loans, this exhibition will be presenting, for the first time in Southern California, a global vision on the different personalities and schools of Rococo. If this aesthetically pleasing genre has become one of the public’s favorite, it is almost impossible to reunite the main actors of this play under one roof, as if the rivalry between them had been passed throughout the centuries – not unlike the protagonists depicted in The Italian Comediansby Antoine Watteau, on loan from the National Gallery, Washington D.C. It is at the Timken that those masters will be presented and confronted to each other, where you will be able to contemplate and compare their similarities - and their differences. Watteau’s investigation of the commedia dell’artesubject matter represents a critical component to the exhibition’s overall narrative with his innovative combination of reality and artifice. The dialogue established between these masterpieces and those of Boucher and Fragonard, who are also represented at the Timken, surely will be interesting, as it is the first time this rare instance of the three most prominent Rococo painters will be exhibited together in San Diego.

Paired with contemporary representations by Yinka Shonibare, Chris Antemann and others, Rococo, Rivals and Revivalsis offering an unconventional spin on the typical subject matter of flirtation and seduction, common during the Rococo period, fantasized in a world where reality and artifice meet. 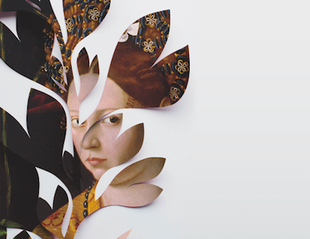 Leela - Portrait Of A Woman In A Green Dress

With the first days of summer approaching, the Timken becomes, once again, the theater of the/modernist installation, turning its galleries into a playground for a contemporary visual artist.

This year, the museum has a real treat: our artist is none other than Bhavna Mehta -named Emerging Artist for the San Diego Art Prize in 2014, who will be the Timken’s artist-in-residence during the month of June, providing visitors the unique opportunity to observe the intricate process of her artistic creation. While in the museum, Bhavna and her assistant will be finishing the last touches to Leela – Portrait of A Woman in a Green Dress, a 3-dimensional artwork on display this summer, echoing the Timken’s Portrait of a Lady by Bartolomeo Veneto.

Leela - Portrait Of A Woman in A Green Dress: the history.

It was back in December 2017 that the Timken’s Portrait of a Lady in a Green Dressfirst caught Bhavna’s eye. She was so intrigued by her sculptural presence, that Bhavna felt compelled to pay homage to her - “with absolutely no intent on copying”. As for the name of her lady, it came from Bhavna’s memories; growing up, she often heard the Sanskrit word Leela which means cosmic play. Leela also comes from the word leelo which means green in Bhavna's mother tongue Gujarati.

And for obvious reasons: unlike Bartolomeo’s Portrait of a Lady, - enclosed in the border of a heavy Venetian frame, stuck in a two-dimensional world with heavy clothing she seems trapped within - Bhavna’s paper Leela will be floating in the museum’s central rotunda. The light wind coming from the museum doors will caress her delicate paper dress, allowing her to dance in the air; her head, surrounded by buzzing paper dragonflies and butterflies infused with her ideas and dreams, embracing her as the center of her own universe.

Living just a few feet away (and right before her eyes), Leela offers a contrasting narrative to Veneto’s Portrait of a Lady. “It’s a powerful dialogue offered by those two women, similar, and yet so different.” says Bhavna. “I dream that behind the scenes, when the museum closes its doors, the two women meet halfway and get to know each other”. A dream Bhavna Mehta invites us all to share. 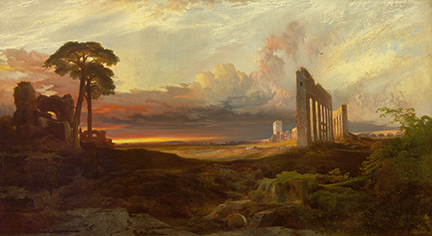 The Romantic Impulse In the American Landscape Tradition

The Romantic Impulse in the American Landscape Tradition traces the unique responses of American painters and printmakers to changing ideas about landscape from the early 19th century to the present day.  The exhibition centers on the Timken's own painting by Thomas Moran, Opus 24: Rome, from the Campagna, Sunset (1867),  and considers how sublime space, ancient ruins and pastoral poetics were expressed by a surprisingly wide variety of artists: Albert Bierstadt, Arthur Wesley Dow, William Keith and others.  Works from the Timken, USD's print collection, and various private lenders will be included.

The Romantic Impulse in the American Landscape Tradition: A Soundscape

Works in this exhibition elicit a sense of awe at the beauty and majesty of nature, as well as a sense of nostalgia for the distant past. In identifying music to accompany the paintings and prints, I turned to the Romantic-era composers, much as the artists shown here turned to earlier examples of European landscape painters for their inspiration.

The soundscape plays on a 30-minute loop.

Ottorino Respighi wrote Pines of Rome in 1924. This is the third movement - Pines on the Janiculum Hill. If you think you hear birds, you do. Respighi incorporated them into his original recording of Pines of Rome. Here, I took the liberty of extending their singing into other areas of the sound track.

On earth reveal'd the beauties of the skies,
Angelic features, it was mine to hail;
Features, which wake my mingled joy and wail,
While all besides like dreams or shadows flies.
And fill'd with tears I saw those two bright eyes,
Which oft have turn'd the sun with envy pale;

And from those lips I heard—oh! such a tale,
As might awake brute Nature's sympathies!
Wit, pity, excellence, and grief, and love
With blended plaint so sweet a concert made,
As ne'er was given to mortal ear to prove:
And heaven itself such mute attention paid,
That not a breath disturb'd the listening grove—
Even æther's wildest gales the tuneful charm obey'd.

Past Exhibitions and Installations 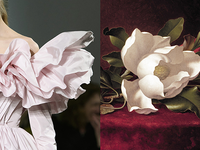 Blessed Beasts and Curious Creatures:
Animal Processionals from the 13th to the 21st Centuries

Collections in Context: American Art from a
Pacific Northwest Collection, 1860-1950

An Archaeologist's Eye: The Parthenon
Drawings of Katherine A. Schwab

Object Lessons: Gainsborough, Corot, and the
Landscape of Nostalgia

Object Lessons: Slice of Truth, the Reality of the Renaissance