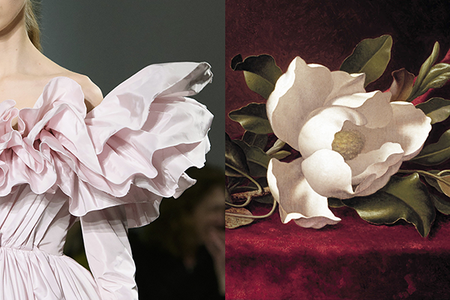 With the/modernist mission in mind, Incontri d’Arte (Meeting of the Arts) reimagines select masterpieces from the Timken collection pairing them with fashion images selected by Bianca Luini, an Italian-based designer in Milan. As Bianca Luini says, “Fashion is everywhere and everything is in fashion.” Housing these images is a Gensler designed and visually stunning installation in the museum that experiments with space and dimensions within the Timken.

the/modernist program was originally inspired by the Timken’s mid-century modern building, which is often recognized as the second most important mid-century building in San Diego, after Louis Kahn’s iconic Salk Institute in La Jolla. The unique and intriguing Incontri d’Arte will show that the inspiration for fashion is often rooted in the masterpieces that have served as the foundation of fine art through the ages. The Timken, Gensler and designer Bianca Luini are the perfect collaborators to feature a modern twist and offer a new perspective on the Timken’s priceless collection of European old master paintings.

the/modernist: Architecture + Design - the Timken’s newest program in partnership with Gensler, a global architecture, design and planning firm, celebrates modernist, post-modernist and other 20th and 21st century approaches to design by visionary architects and artists. Modernismo Incontra Maestri launches the first installation for this program.