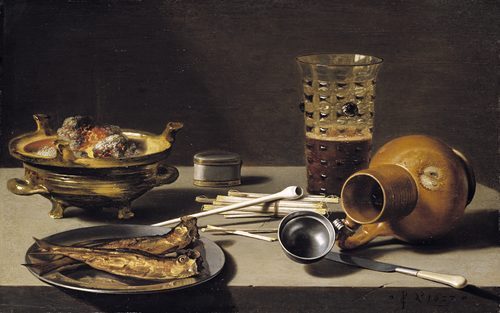 In the realm of art history, still life denotes a type or genre of painting which typically refers to an arrangement of objects. Traditionally, inanimate forms from the man-made or natural world such as flowers, dead game, fruit, or vessels such as glasses, bowels or baskets would be depicted. The word is a direct translation from the Dutch word 'still even' which originated during the seventeenth century.

The pictorial representation of objects has existed since antiquity, but it was not until the Renaissance that still life painting reemerged as an independent genre of art. Still life painting was particularly favored in Northern Europe, especially in Holland and Flanders during the late Renaissance and Baroque. The effects of the Protestant Reformation in what is today Holland, led to a decline in religious painting and a focus on other subject matter. Still life art could also be found in Flanders, Italy, Spain, and to a lesser extent France.

This docent-led talk will present an overview of still life painting. It will discuss the various forms of still life such as vanitas, trompe l'oeil, and pronkstilleven, and highlight some of the greatest artists who practiced this genre including: Albrecht Durer, Jacopo de'Barbari, Pieter Claesz., Francisco de Zurbaran, and Jean-Simeon Chardin.