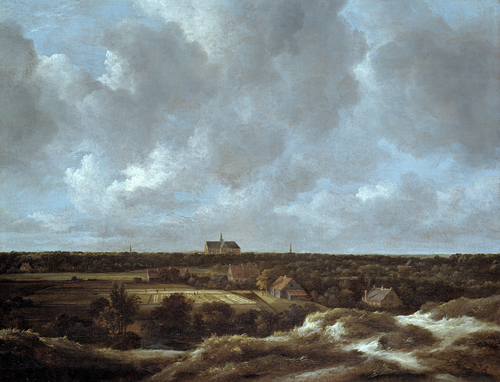 In Western art, landscapes have been depicted beginning in ancient times. The Greek and Romans created wall paintings of garden scenes and landscapes. By the fall of the Roman Empire however, the tradition of representing pure scenery was reduced. The landscape thus became more of a backdrop for figural and religious scenes.

Though landscape painting was not an individual genre, by the early Renaissance, images of the countryside began to emerge as a background in more compositions. Venice witnessed the emergence of landscape elements in the late 15th and early 16th centuries with the work of Giovanni Bellini and Giorgione. By the mid-16th century, artists in Northern Europe also began to incorporate more scenery in their art. The great Flemish painter of the 16th century, Pieter Brueghel the Elder, specialized in colorful, highly detailed landscapes with religious or moralizing undertones. By the 17th century, a well-defined genre of landscape painting was established. This was most prominently seen in France and the Netherlands. By subsequent centuries artists became known primarily for their depictions of the countryside, gardens, and nature.