Anthony van Dyck and the Court of Charles I

No painter has done more to define an era than Anthony van Dyck. His portraits of King Charles I, Queen Henrietta Maria, and the courtiers who surrounded them are images of regal majesty, gilded youth, and feminine beauty. Charles I's patronage of the Flemish painter created a revolution in British portrait painting whose reverberations continued to be felt well into the 20th century. Join Timken Docent Elinor Merl for virtual talks about portraits in the Timken collection. 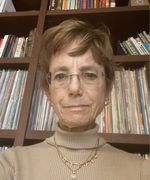