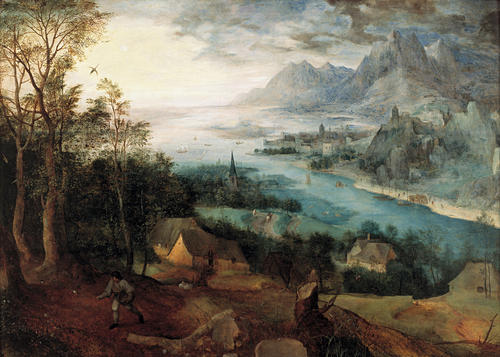 Early Netherlandish painting reflects the work of artists active in the Low Countries during the 15th and 16th centuries. These Northern Renaissance painters were operating mainly in the flourishing Burgundian cities of Bruges and Ghent. This period begins circa 1420 with the careers of Robert Campin and Jan van Eyck. It ends at approximately 1523 with the death of Gerard David. However, the end of this era has often been extended by scholars to the death of Pieter Bruegel the Elder in 1569 or the advent of the Dutch Revolt in 1566-1568.

The principal painters of this era made tremendous advances in natural representation and illusionism, and their artwork frequently displayed complex iconography. Primarily the topics of most of the paintings were religious in nature or limited to smaller portraits. Often these religious paintings were comprised of single panels or more complex altarpieces in the form of triptychs and polyptychs. Some of the major artists who will be discussed in this docent-led talk are Jan van Eyck, Robert Campin, Dieric Bouts, Hugo van der Goes, and Pieter Brueghel the Elder.