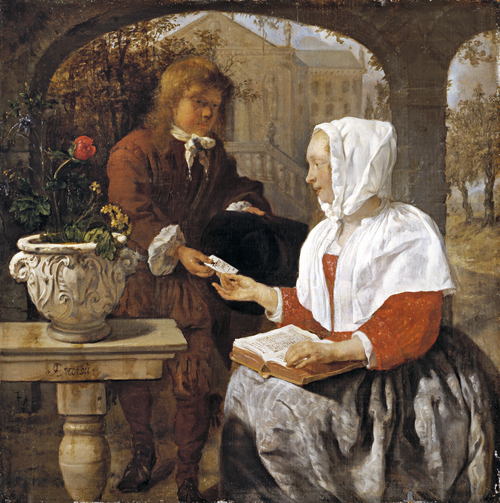 Just as e-mail now dominates written communication, in the 17th century the writing of personal letters became widespread and fashionable. Although letters had long existed, the notion that they could convey private feelings and emotions suddenly captured the popular imagination and transformed personal communication. Duringthis period, not only was Holland the most literate country in Europe and a leading publishing center, but it was also the focus of an
explosion of epistolary activity. 17th-century Dutch genre painters became the first to depict anonymous people writing, reading, dispatching and receiving letters. Leading painters like Gerard ter Borch, Gabriel Metsu, Frans van Mieris, Pieter de Hooch and the renowned Johannes Vermeer made the letter a central feature of theirscenes of everyday life, defining the subject and creating images that would influence generations of painters to come.