Back to full collection 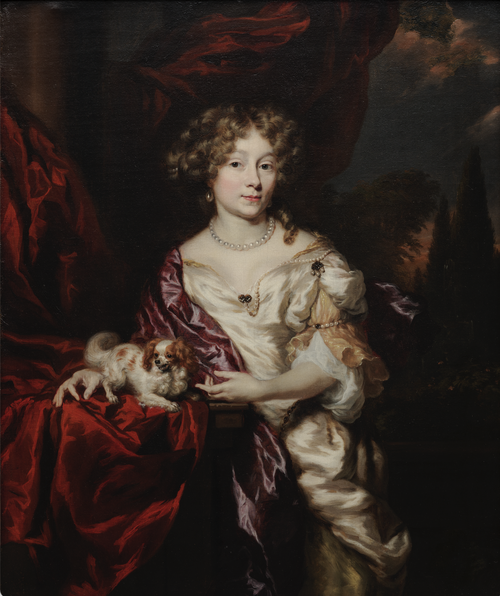 Nicolaes Maes was Rembrandt's best-known pupil and by the 1660s he had developed a fluid style of painting that readily lent itself to portraiture. This portrait may be of Mary Stuart, daughter of James, Duke of York, and Anne Hyde. In 1677, the year this work was painted, fifteen-year-old Mary Stuart married William of Orange, Stadholder of the United Provinces of the Netherlands. She later became Mary II when he became William III. They ruled England and were popularly known as William and Mary.

Estate of Lord Northwick, Thirlestane House, Cheltenham, sale, Phillips, no. 1791 (as “G. Netscher. Portrait of a Princess of the House of Orange, with a Dog”), July 26–August 30, 1859 [1] W. F. B. Massey-Mainwaring, 1884 [2] W. F. B. Massey-Mainwaring collection, sale, Christie’s, London, March 16, 1907, lot 17 (as “G. Netscher. Portrait of a Princess of the House of Orange, with a Dog”), (£183.15, to Rosenberg) [3] Rosenberg Gallery, New York [4] H. L. Ehrich Gallery, New York, by 1927 [5] Henry A. Butler, Youngstown, Ohio Rosenberg & Steibe l, New York, by 1974–79(?) [6] Robert Noortman Gallery, London, acquired from dealer Alex Wengraf, London [7] Noortman & Brod, New York, by September 1981 [8] Mr. (and Mrs.?) Alan Mark Levenson, Pasadena, California Acquired by the Putnam Foundation, 1986 [9]
Provenance Notes:
[1] Leòn Krempel, Studien zu den datierten Gemälden des Nicolas Maes (1634–1693), Studien zur internationalen Architektur- und Kunstgeschichte 9 (Petersburg, 2000), p. 322, no. A196, fig. 270, plate XXIII. [The photo reproduced here is from the Archief Sumowski at the Rembrandthuis, Amsterdam.]
[2] Krempel, 2000, no source listed
[3] Photocopy of original sales list per Christie’s, received May 2005; Christie’s have no record of Rosenberg in connection with this sale, beyond the notation in the sales catalog.
[4] Presumably this Rosenberg is connected with the firm that handled the painting again later, as is so often the case. There was at the time more than one Rosenberg involved in the art market.
[5] Krempel, 2000, lists “L. R. Ehrich,” which is here emended to “H. L. Ehrich.” He also notes a San Francisco exhibition (1927) while the painting was under control of Ehrich.
[6] Mentioned in Apollo 99, “A Princess of Orange,” (April, 1974), p. 15, ill. and Art News 78, no. 4 (April, 1979), “Mary Stuart,” p. 6, no.1, ill.
[7] Noortman (London, Noortman & Brod, 1980. A Selection of Important Paintings by Old and Modern Masters from our 1980 Collection, no. 13, ill.). Acquired from Alex Wengraf as reported in communication from Robert Noortman, August 1, 2005.
[8] Exhibited from September 10, 1981
[9] The Art Loss Register indicates “by gift” of the Levensons, December 18, 1986.
An attorney representing members of the Oppenheimer family presented a claim regarding this painting, and a number of others in the Putnam Foundation collection, in 2004. Although the family lost a number of works to Nazi looting, none of the Oppenheimer paintings, which were sold in early 1935 in a Nazi-sanctioned auction, correspond to pieces owned by the Timken. The inquiry to Noortman Gallery, Maastricht, has resulted in some additional information: Mr. Eddy Schavemaker of that firm provides in an email of August 1, 2005, recent contact information for Mr. Brod, who is apparently still living. The dealer Rosenberg and Stiebel, New York, (known to house the painting 1974–79), still does business as Stiebel, Ltd., under the management of Gerald Stiebel. To date, research has uncovered nothing to connect the painting with that of the famous Paris dealer Rosenberg, nor any other known looted collection.

To proceed with your image request, fill out the Image Request Form and email it to registrar@timkenmuseum.org.

This record has been reviewed by Timken Museum of Art staff and may be incomplete or contain errors. Our records are constantly revised. Inquiries about provenance are advised to contact the Director of Curatorial Affairs: curator@timkenmuseum.org.