Erick Toussaint, San Diego’s “Sidewalk Chalk Dad,” will set up shop on the Timken plaza in Balboa Park throughout July and August.

Chalk artist Erick Toussaint kicks off this series with a preview day on Saturday, June 26.  Known as San Diego’s “Sidewalk Chalk Dad”, Toussaint will recreate intricate sidewalk art renderings of some of the most admired paintings within the Museum’s collection.  The outdoor Creation Station officially begins on Saturday and Sunday, July 3 and 4, 10am to 2pm with the Family Mural Design and alternates each weekend through August with Sidewalk Chalk Art.

Toussaint, who is the design director at San Diego’s Natural History Museum, began his sidewalk chalk art creations during the pandemic last summer.  Drawing was a way to keep his art skills fresh while the Natural History Museum was closed.  However, the idea originally came about after asking his daughter what would be a fun activity to do outdoors when taking a break from distance learning, and she suggested chalk art.  Say no more—he took the idea and ran with it.  Toussaint’s creativity was soon flourishing to the delight of his Ocean Beach neighbors.  His chalk art helped to foster a greater sense of community as many members of the neighborhood would visit on their daily walks during quarantine to catch the latest of his weekly chalk reproductions of some of the world’s great masterpieces.

“We’re hoping that this sidewalk art project will serve to remind people of all the beautiful art on display at the Timken, so that when the Museum does reopen people will be inspired to visit, enjoy and return again,” commented Toussaint.  “Also, I feel that taking these paintings and transferring them to the ground via this ephemeral medium makes them accessible and approachable—literally and figuratively.  I believe there are lots of folks who will engage with the art in this way who may be hesitant to do so in the context of a museum.  Hopefully, this project can help bridge that gap in a small but significant way.”

As we reemerge from the pandemic and reconnect with family and friends, the Timken Museum of Art is hoping to create that same sense of community but on a larger scale as the Museum invites all visitors to Balboa Park to come by its plaza and marvel at Toussaint’s talent as he introduces a new artistic twist to one of San Diego’s most beautiful and always-free destinations for both residents and tourists alike.  Visitors can also create their own chalk masterpieces alongside Toussaint on a large chalkboard installed in the plaza.

“The Timken is continually exploring a variety of ways to engage with the community, and we are so pleased to have Erick Toussaint bring our masterpieces to the public in such a creative and unique way,” stated Megan Pogue, executive director of the Timken Museum of Art.  “While we are in the final phase of our renovation and planning for our grand reopening, having Erick use our outdoor plaza as his canvas is a wonderful way for us to continue carrying out our mission during our closure and for the public to experience great art—and perhaps inspire some budding artists among us.”

Vote for Your Favorite Painting

On Friday, May 28, the Timken will launch a social media campaign offering the public the opportunity to vote for its favorite Timken painting.  The top five (or possibly six) paintings receiving the most votes will be selected to be recreated in chalk by Toussaint.  The public will be able to cast votes via the Timken’s Facebook, Instagram and Twitter pages.  Voting results will be announced on social media as well as listed on the Timken’s website.  Voting begins on May 28 and runs through  Monday, June 7.  All voting participants will receive a 20 percent discount coupon toward gift items at the Timken’s online store.  The public is invited to cast a vote at: https://mailchi.mp/timkenmuseum/2021-summer-voting-chalk-art-series.

Among the works under consideration to be part of Toussaint’s summer repertoire:  Rembrandt Harmensz van Rijn, Saint Bartholomew, 1657, oil on canvas.  Rembrandt is one of the greatest artists of all time and acclaimed for his compelling representations of the human condition.  The Timken is the only art museum in San Diego to have a painting by Rembrandt on public display.  Nicolas de Largillière, Portrait of Marguerite de Sève, Wife of Barthélemy-Jean-Claude Pupil, 1729, oil on canvas.  Largillière enjoyed a long and successful career and was sought out early in the 18tth century by important new clients from the provinces of France.  Eastman Johnson, The Cranberry Harvest, Island of Nantucket, 1880, oil on canvas.  Johnson began to draw inspiration from Nantucket Island south of Cape Cod in Massachusetts.  With his view of a cranberry harvest, he successfully realized his efforts to paint a celebration of New England outdoor life.

Toussaint is partial to Eastman Johnson’s The Cranberry Harvest, Island of Nantucket and hopes to undertake it as he stated:  “It is just such a sensitive snapshot of a time and place that feels truly authentic. This painting is transformative for me.  I'm genuinely intimidated at the prospect of tackling this one with its subtle hues since chalk works best with very high contrast, but I'm excited about the challenge.”

When Erick Toussaint is not at the Timken with his sidewalk chalk art, a talented local artist will be onsite leading the Timken’s popular Family Mural Design.  Two, eight-foot long canvases will be installed each day open for all to fill with paint and artistic expression.  On Saturdays, a canvas for those seeking an extra challenge featuring a summer-related theme will be available, while on Sundays, the mural artistry will be one of free expression to go where imagination leads.  The local artist will be available to lend assistance to any youngsters seeking painting assistance.  Docents will also be on hand periodically throughout the summer for a “teach and talk” with the public about the Timken and its art.  Aspiring artists of all ages are welcome to come to the Timken plaza and lend their talents to the different murals each weekend.  The Timken will provide all the art supplies. 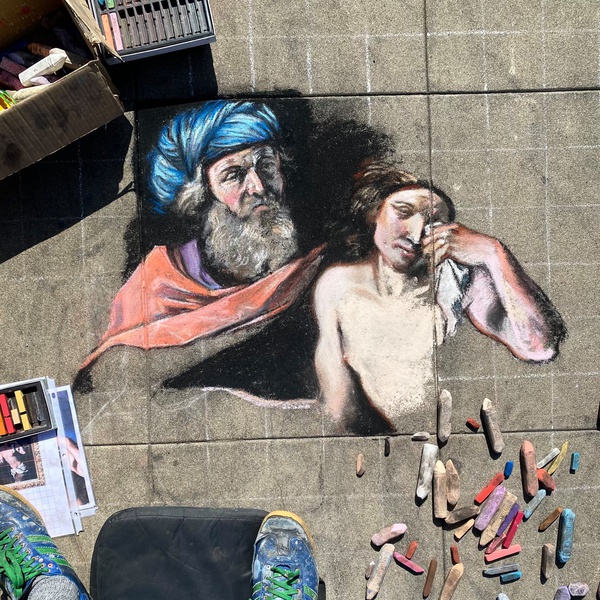 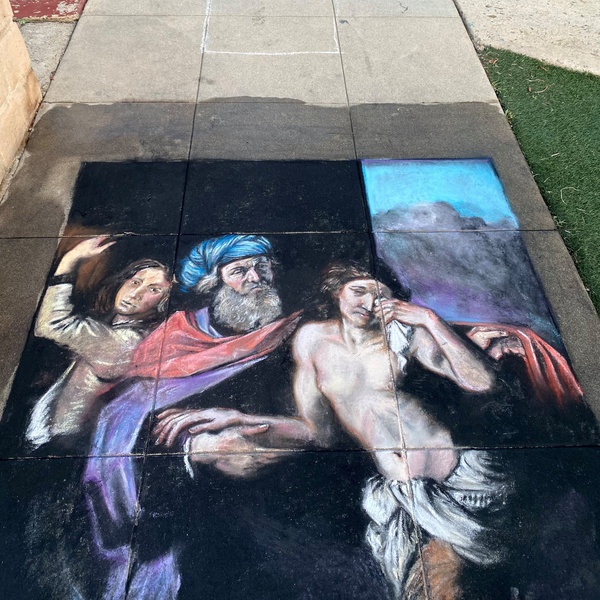