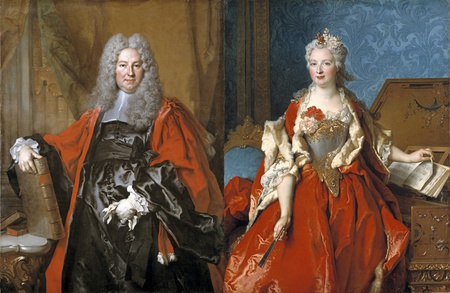 If you were “somebody” in early-18th-century France, you definitely wanted to have your likeness painted by an important artist. As proof of noble lineage and evidence of high social standing, portraits counted among essential décor in that country’s elite households. Should you happen to be in Paris, and were not a member of the royal family, it would have been in your best interest to approach Nicolas de Largillière (1656-1746) for this task. Otherwise you headed to the studio of Hyacinthe Rigaud (1659-1743). Largillière’s solid academic training meant that he was skilled at depicting courtiers in environments that communicated their prosperity and prestige. And because he lived for a long time, this painter was familiar with his sitters’ expectations for both grand manner portraiture of the late-Baroque period and more modern, Rococo sensibilities. Depending on your taste and outlook, a cosmopolitan flatterer, like Largillière, was equipped to provide a wealthy married couple with everything they desired in self-representation.

Let’s take Largillière’s portraits of Barthélemy-Jean-Claude Pupil and his wife, Marguerite de Sève, as examples. How did this couple wish to be seen? Monsieur Pupil opted to be portrayed in a relaxed, yet professionally-determined demeanor. Wearing a long, powdered wig, known as a peruke, and dressed in black satin judicial robes with red cape, he gazes back at the viewer with impartiality and quiet confidence. His right forearm is draped casually over an oversized, leather-bound legal text. He was a prominent jurist, after all. Pupil had several years earlier married his social superior, Marguerite de Sève. As a consequence of that marriage, he was awarded a series of increasingly prestigious legal appointments in Lyon. By contrast with her more soberly-dressed, upright husband, Madame Pupil, poses while garbed in a shimmering red gown, rimmed with fur sleeves. She wears an ornamental cuirass, or armored breastplate, from the top of which freshly cut carnations burst. She has sprigs of flowers in her hair, too, and she wields a silver fan in her hand. Scholars have observed that the sheet music she fingers in her other hand relates to a popular drinking song. A slight smile--we might even call it a smirk--enlivens her heart-shaped face. Part goddess of war and part party animal, it is hard to escape the notion that Marguerite de Sève was a full partner in Largillière’s creation of a likeness at once full of vitality and suggestive of the sitter’s potential for mischief.

Presently, I am reminded of a question posed by Jacques Derrida: “What is a pair?” Writing about van Gogh’s depiction of empty boots in his book entitled La Vérité en peinture (1978, The Truth in Painting), Derrida asked provocatively, and repeatedly, what makes us think that any presumed visual coupling is, in fact, a pair? Employing a mock-dialogue format that epitomizes his deconstructivist method, the French philosopher blazes through a set of matched groups--laced and unlaced, right and left, presence and absence, male and female--and dismisses them as more-or-less misguided judgements. Implied pairings are misleading, Derrida insists, and our hasty conclusions about these identities must always remain indeterminate and provisional. Could we say the same thing about Monsieur and Madame Pupil?

There’s no doubting that the two large portraits at the Timken were intended to be shown side by side. They descended together through the Pupil family tree until 1969, after which they were acquired by the Putnam Foundation for this museum. According to the rhetoric of their time, they were unquestionably and determinedly a pair. Indeed, Monsieur and Madame Pupil appear to be a nearly perfect couple; their canvasses are sized the same and, respectively, they possess the complementary gendered stereotypes that 18th-century French society conferred upon them: he is a “man of laws” and she is a “creature of culture.” Temperamentally, however, they could not look more different.  I ask everyone: “at the end of a long period of social isolation, who would you want to lead us in song?”