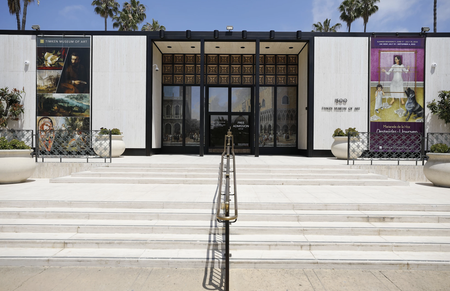 In Balboa Park, the Timken Museum of Art is a polished jewel

After a two-year renovation, the Balboa Park art museum reopens its doors with a focus on inclusion and accessibility

The Timken Museum — the jewel box of Balboa Park — is freshly polished both inside and out and ready to open.

The $3 million, two-year renovation project of the 57-year-old museum includes system upgrades, the restoration of the building’s bronze finishes and revamping of the exhibition spaces.

“We wanted to return it to its original glory while upgrading the mechanical systems,” said Megan Pogue, the museum’s executive director. “A lot of work that has been done the visitor won’t see.”

What visitors will see when the doors reopen to the public on Wednesday for the first time since March 2020 is a bright, welcoming space. Every painting and sculpture will now have educational text, designed to inform both art novices and the regulars who come see their favorite pieces and artists.

“One of our biggest goals is to invite people in,” Pogue said. “We want to really embrace our free status. This is the place for people who can’t afford admission prices — where they can see fine art in person. And we are the only museum in San Diego that has a Rembrandt.”

“We want to be known as the people’s museum. People can come here and not feel intimidated,” she said.

For many years, the simple, rectangular midcentury modern building, set among Balboa Park’s ornate Spanish Colonial Revival architecture, was an enigma. The art — European and American masters and Russian icons — was there without explanation. The galleries, with original 1950s dark green or 1980s pink fabric walls, seemed dark and unwelcoming to the casual visitor.

Pogue and Derrick Cartwright, the museum’s director of curatorial affairs, have been working hard to change that image, and their goal of inclusivity extends to the collection.

During the more-than-two-year closure, which started with the COVID-19 pandemic shutdown, the museum acquired two works donated by patrons of the arts. One is a marble “Bust of Eve” by Thomas Ball, donated by Kevin and Irene Rowe, that will add some dimension to the collection, Cartwright said. The other is “Salomé” by Ella Ferris Pell, an accomplished artist who studied in France and was well-known as a salon artist in New York. Given to the museum by Sandra and Bram Dijkstra, “Salomé” is the first piece in the collection by a woman.

Cartwright hopes to add more women artists to the 84-piece permanent collection and is finding ways to be more inclusive with temporary exhibitions where contemporary art complements the classics.

“We really need to bring in the next generation. We need to broaden our appeal with more diversity,” Cartwright said. “We need to connect contemporary artists with the collection and get artists of color involved.”

Marianela de la Hoz, this year’s artist in residence, is bringing her Mexican heritage to a suite of 20 paintings based on the story of Penelope, a character in Homer’s “Odyssey.” Her residency starts June 16 when she will be finishing her final work in the Destejidas (Unwoven) series.

During the closure, Pogue said, “we had a chance to rethink virtually everything.”

The artwork, which was removed during the installation of the new HVAC and humidity systems, has been rehung in chronological order. The paintings, which range from the 14th century to the beginning of the 20th century, start with Russian icons and progress through galleries dedicated to Italian, Dutch/Flemish, French and American masters.

“The Timken has a wonderful collection from which we, in fact, receive loans for our own exhibitions,” said Roxana Velásquez, the executive director and CEO of the San Diego Museum of Art next door. “Our collections are complementary with both institutions being founded on European old masters.”

The new chronological sequence allows people to see connections and transitions as styles developed and art centers evolved in different countries. Going through the galleries clockwise is like a quick lesson in art history, Cartwright said. Neutral gray walls create a uniform look that puts the focus on the art.

“It invites people to think with fresh eyes,” Cartwright said.

The Timken’s collection originated with Amy and Anne Putnam, two sisters who came to San Diego in the early 1900s from Vermont with their family. The two were serious scholars, studying languages, philosophy, history and music. They lived in the mansion their father, Elbert, built on the corner of Walnut and Fourth avenues in Bankers Hill.

The sisters started buying paintings in the 1920s. After their cousin Willie Putnam left them his fortune of $5 million in 1938, the two pursued their passion for acquiring old masters in earnest. They bought works from such artists as El Greco, Goya, Van Dyck and Zurbarán and donated them anonymously to the Fine Arts Gallery of San Diego, now the San Diego Museum of Art.

After a falling out with the gallery’s director Reginald Poland in the late 1940s, the reclusive sisters decided instead to loan their increasing number of paintings to museums across the country. In 1950, the two asked their attorney Walter Ames to establish the Putnam Foundation, the beneficiary of their estate that would continue to acquire artwork. By that time, Amy was 75 and Anne was in her 80s.

As the foundation continued to buy paintings, Ames sought to find a way to keep the Putnams’ impressive collection in San Diego. He turned to his client Henry Timken Jr., whose family had made a fortune in roller bearings.

The Timken Foundation agreed to finance construction of a new gallery, which was proposed as a “wing” to the Fine Arts Gallery. The architectural firm of Frank L. Hope and Associates was commissioned to design the building, but the firm’s vision of a simple, symmetrical, ultra-modern building that would embrace Balboa Park from within wasn’t what city leaders had in mind.

They wanted something that would fit with the architectural style of the park’s buildings from the 1915 Panama-California Exposition and the 1935 California Pacific International Exposition. Despite opposition, the Timken’s design was approved by the city because Ames had threatened to take the collection elsewhere if it wasn’t. The park’s Home Economy Building, designed by architects Carleton Winslow and Bertram Goodhue, was razed to make way.

The 10,400-square-foot museum, which opened in October 1965, was constructed with travertine marble, bronze and glass and is now considered to be among San Diego’s finest examples of midcentury modern architecture.

“The building is part of our collection,” Pogue said. “It’s the only see-through building in Balboa Park.” Glass surrounds the east- and west-facing doors for views of the Plaza de Panama and the lily pond. Inside, full-length glass windows connect the interior with courtyard gardens.

Years of patina have been removed from the bronze baseboards and the ornamental accents, delicate florets in lace-like patterns that wash like waterfalls down interior doors, exterior screens and surrounding fences.

Much of the time and cost of the restoration went into upgrading the mechanical systems. The new high-efficiency dehumidification system is outfitted with antiviral technology originally engineered in conjunction with the Department of Defense.

“The Timken’s reopening is an example of how institutions, including The San Diego Museum of Art, are placing importance on the visitors’ experience, particularly following the pandemic. Among its renovations, we understand the Timken has made several improvements to ensure guests’ safety during this COVID era and beyond, and we applaud these efforts,” Velásquez said

The antiviral system, which uses ultra-fine HEPA filters and ultraviolet light, is expected to remove 99.9 percent of airborne pathogens.

“We are the only museum in the world to have that technology,” Pogue said.

Plans for renovations began about five years ago, so when COVID closed everything down in 2020, the time seemed right to start the work. The Timken Foundation — now known as the Timken Foundation of Canton — once again stepped in, paying for the bulk of the improvements. The Helen Frankenthaler Foundation contributed $100,000 for the HVAC system.

Pogue envisions having more programming at the museum. To that end, audiovisual equipment was installed in the museum’s central space. Plans are underway to have more music programming and lectures.

“We are very small, and people appreciate that post-pandemic, with smaller, more intimate events,” Pogue said.

The Timken has also partnered with a number of Balboa Park institutions, including the San Diego Railroad Museum, to exhibit the Timken’s popular Christmas ornaments and the San Diego Zoo with an animal-themed exhibition to celebrate the zoo’s centennial.

“The Timken is committed to be a partner with all other institutions,” Pogue said. “I love the collaborative aspect of the Timken. Our aim is to have art without barriers.”

A timeline: Timken Museum of Art

2020: Exhibition: “Captivating Women from the Dijkstra Collection.” Sandra and Bram Dijkstra donate Ella Ferris Pell’s “Salomé" (1890) to the Timken. The work is the first painting by a female artist to be added to the museum’s permanent collection. Museum closed March 17, 2020 due to COVID-19. Extended self-closure to enable a visitor-enhancement renovation. 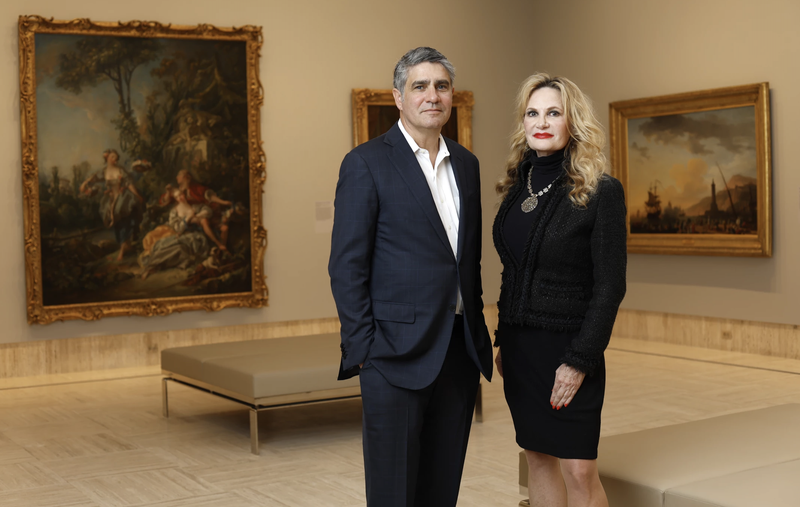 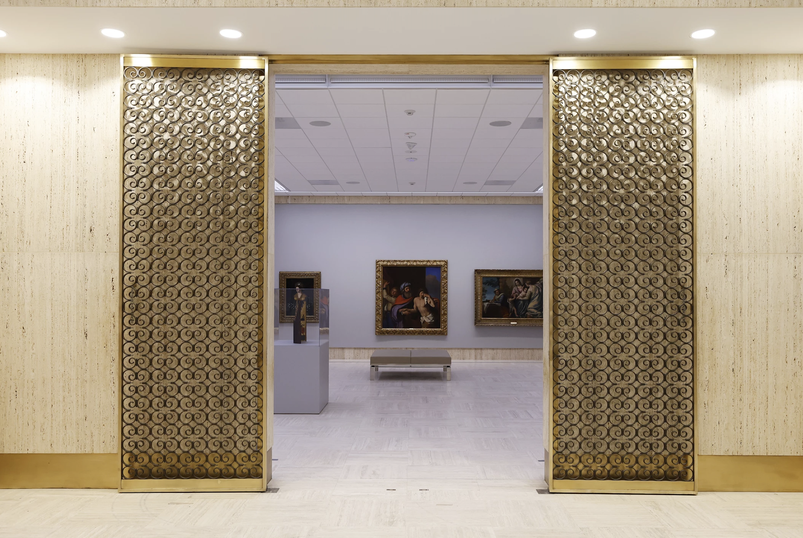