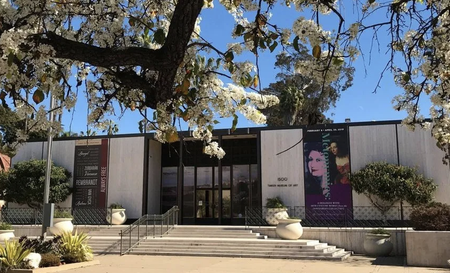 Timken Museum of Art of San Diego Reopens to Display its Full Splendor and Original Glory as a Mid-Century Modern Architectural Treasure; Renovated Interior Offers a Serene and Contemporary Space for the Museum’s Priceless Collection

After a two-year closing, the Timken rolls out the red carpet as it welcomes the public back to San Diego’s ‘Jewel Box’ of Balboa Park

Highlights of the Timken’s Grand Reopening:

The Timken Museum of Art is proud to announce its grand reopening with two events during the first week of June 2022. On the morning of Sunday, June 5, the Timken board of directors, executive management, staff, docents and volunteers will host a “Member Preview” in the newly renovated iconic Mid-Century Modern structure that first opened in 1965.  Later Sunday evening, a special event will take place to celebrate and honor those responsible for the renovation.  This special day has been planned for longtime Timken supporters and those who have steadfastly supported the Museum during this extended closure.

On Wednesday, June 8, the Timken will welcome the public back to the new Timken that includes a reimagined look at the Timken’s various galleries including new wall colors, lighting and new labels that tell the unique story of each artwork in its priceless collection of European Old Masters, American artists and Russian icons.

Upon arrival, visitors will see that part of the impressive renovation includes conservation of the historic bronze, which covers much of the Museum’s entrance and interior as structural and decorative accents. These bronze elements, which had accumulated a dark black patina over time, have been polished back to its original striking and eye-popping golden finish.

During the two-year closure, Megan Pogue, the Timken’s executive director, and Dr. Derrick R. Cartwright, director of curatorial affairs, have worked tirelessly on every last detail of the new interior to make the reopening possible. This often included immersing themselves in the duties of architects, engineers, construction crew, city officials, and operations staff while monitoring the ever-fluctuating price of steel and the labor and supply chain issues to meet deadlines and stay on budget. The time of the closure also allowed for the opportunity to reinforce and strengthen the museum’s relationship with the Timken Foundation of Canton, which has made the renovation possible with additional support from the Helen Frankenthaler Foundation. Pogue offers the following thoughts:

“Referred to as the “Jewel Box” of Balboa Park, the Timken has been known the world over since it first opened 57 years ago,” stated Pogue. “At the same time, to enhance the Museum and continue serving the public of the 21st century—from the art novice to the aficionado—we took this opportunity to renovate the Timken’s galleries from floor to ceiling and update its technological and operational systems to state-of the-art status.  In other words, to reimagine and redefine the Timken and once again open our doors as a world-class art museum.”

Pogue continued: “The required, pandemic-related closure led us to make this long-discussed renovation a reality.  The Timken remains a welcome destination to enjoy, contemplate and appreciate great art.  Our iconic building remains architecturally unique in Balboa Park, and of course, admission to the Timken will remain free to all.”

New Art at the Timken: First Work by a Female Artist

Cartwright played a pivotal role in the addition of two significant works to the Timken’s collection: Ella Ferris Pell’s 1890 Salomé, reportedly the most famous painting of her career and the exquisite, Bust of Eve, by sculptor Thomas Ball. “Ella Ferris Pell’s 1890 Salomé is the first work by a female artist to become part of the Timken’s permanent collection—and it will not be the last,” commented Cartwright. “Pell’s career is illustrative of the challenges faced by many accomplished female artists during the late 19th century. We are most grateful to Sandy and Bram Dijkstra for this transformative gift.”

Cartwright goes on to say, “Salomé was exhibited at the Paris Salon and the National Academy of Design in New York City. It received considerable attention before being acquired as a significant contemporary work by the Boston Art Club.  Since then, it has become a mainstay in academic writing about the taste for exotic subject matter in the Gilded Age.  We are thrilled to share this work with the public and to place it in the context of our stellar American art holdings.”

Cartwright's long-term vision is for the Timken to display important work by women artists in every gallery, and Pell's Salome is a first step toward fulfilling this goal. The painting will be displayed in a prominent location in the Timken’s American Gallery.

“Thomas Ball’s Bust of Eve will also considerably strengthen the Timken’s American holdings,” stated Cartwright.  “Although he is best known for his larger-than-life equestrian statue of George Washington at the entrance to Boston’s Public Garden, Ball was also one of the first American sculptors to patent and cast in bronze affordable domestic statuary.  He made a career of portraying statesmen and historical figures rendered in a naturalistic style.”

Pogue added, “We are deeply grateful to Kevin and Irene Rowe for their generous donation of this gift, which introduces a dynamic new dimension to the Timken's representation of American art. With the addition of Pell's Salomé and Ball's Bust of Eve, we will be able to offer a much richer history of the art of North America.”

It may seem that including information on each piece of art is a foregone conclusion for museums today.  However, this wasn’t always the case.  Historically, people who visited museums were often familiar with the art, its style and even the artist, so labeling museum collections was considered not necessary.  But as audiences changed and evolved, providing more information on the collection became quite important.

Creating labels requires a deep knowledge of the art and the significance of its impact at the time when it was created.  It also requires that the curator and a museum’s artistic team be able to tell a story—to inform, enlighten, inspire, educate and in its own way, entertain.

The Timken’s didactics will do just that—tell a story and make art appreciation an integral part of the museum experience. Cartwright and his team want to share their knowledge in order to engage visitors and keep them coming back time and time again.

The Timken has installed state-of-the-art, patented, antiviral technologies, originally engineered in conjunction with the United States Department of Defense, to ensure the health of visitors. This innovative system will maximize the “capture and kill” rate of airborne pathogens at a level considerably higher than that of hospital operating rooms.

“The Timken and Putnam families, innovators themselves, created our free museum in 1965 as a result of their successes in technology and engineering,” stated Jessie J. Knight, Jr., chairman of the Timken’s board.  “In fact, their work revolutionized the transportation and beverage industries. We are honored to carry on that tradition by becoming the first museum in the world to bring cutting-edge, military grade technology into practical, everyday use.  We look forward to sharing this technology with San Diego, the nation and the world as we work toward a healthier and more sustainable future for all of us.”

We are grateful to the Timken Foundation of Canton for making our renovation project possible.  Additional support was received from the Frankenthaler Climate Initiative of the Helen Frankenthaler Foundation.