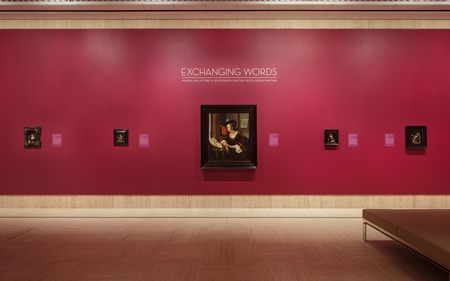 Dr. Lara Yeager-Crasselt serves as guest curator for these esteemed paintings of the Dutch Golden Age

On September 21, 2022, the Timken Museum of Art will open one of its most impressive exhibitions in recent memory: Exchanging Words: Women and Letters in Seventeenth-Century Dutch Genre Painting with Dr. Lara Yeager-Crasselt of The Leiden Collection serving as guest curator.  Artists in this exhibition include Frans van Mieris (1635–1681), Gerrit Dou (1613–1675) and Gabriel Metsu (1629–1667), whose 1658 painting, A Girl Receiving a Letter, is both part of the Timken’s permanent collection and included in the exhibition.  This highly anticipated exhibition from The Leiden Collection runs through the end of the year closing on December 31.

Women and letters feature prominently in Dutch genre paintings from the second half of the seventeenth century.  Captivating images show women reading, writing, and receiving letters, often in the company of books, and exchanging ideas with present or absent companions in upper class milieus.  Although the contents of these missives are rarely legible, they invite curiosity and contemplation, drawing the beholder into intimate, domestic spaces.  Such scenes emphasize women’s engagement with the written word and demonstrate a remarkable interest in representing their intellectual lives.

Quote from Lara Yeager-Crasselt:  One of the most exciting aspects of our collaboration with the Timken has been the opportunity to explore this beloved theme of Dutch genre painting from a new perspective. The exceptional group of paintings represented in the show reflect and challenge broader attitudes towards the education of women in this period, engaging with various societal ideas surrounding women’s literacy and learning.  The ways in which artists like Gabriel Metsu and Frans van Mieris represented this subject matter struck me as surprisingly modern, and must have seemed that way to many seventeenth-century viewers as well.  I’m thrilled to be able to share and explore these ideas in this jewel-like exhibition, which has been made possible by drawing on the strengths of both collections.

Founded by Thomas S. Kaplan and Daphne Recanati Kaplan, The Leiden Collection is among the largest and most important collections of 17th-century Dutch art in private hands.  Named after Rembrandt van Rijn’s native city, The Leiden Collection has extraordinary depth and breadth in paintings by Leiden artists, ranging from significant paintings by Rembrandt and Jan Lievens to outstanding works by Gerrit Dou, Frans van Mieris, Gabriel Metsu, and Johannes Vermeer.  At the core of the Collection are seventeen paintings and two drawings by Rembrandt, the largest private collection of works by the master.  The Collection also focuses on the representation of other artists from Leiden, in particular the fijnschilders (“fine painters”), including Gerrit Dou and Frans van Mieris.  In fact, the number of paintings by fijnschilders represented is unmatched in any other private or public collection in the world.

The Online Catalogue of The Leiden Collection (www.theleidencollection.com), edited by Arthur K. Wheelock Jr. and Lara Yeager-Crasselt, explores the Collection through scholarly entries of more than 175 paintings and drawings, artist biographies, and essays.  With contributions from more than a dozen leading scholars, the catalogue illuminates the major artists and themes of the Collection, which represents one of the richest periods of artistic creativity in European art. Because of the Collection’s breadth, depth, and quality of works, its online catalogue provides an unparalleled opportunity to appreciate the artistic genius of Rembrandt and the many artists who worked in his orbit, as well as to study their impact on broader Dutch traditions of the 17th century.

“The Leiden Collection is known throughout the world for the quality of its Dutch collections,” explains Derrick Cartwright, the Timken’s director of curatorial affairs. “I can’t think of a better partner to signal our commitment to exploring the extraordinary strengths of our own Dutch holdings. The opportunity to partner with The Leiden Collection, and its talented curator, Dr. Lara Yeager-Crasselt, is a privilege and a real benefit for art lovers in Southern California.”

Thomas S. Kaplan is an American entrepreneur and investor, environmentalist, and art collector. Dr. Kaplan and his wife, Daphne Recanati Kaplan, began to collect the art of the Dutch Golden Age in 2003.  Within a few years they established The Leiden Collection, named in honor of Rembrandt’s birthplace.  Their commitment to Rembrandt and his circle soon evolved into one of the most important collections of 17th-century Dutch art in private hands.  The Kaplans’ collecting began with Mrs. Kaplan’s early engagement with 20th-century modernist design, an area in which she assembled one of the finest collections of the great French and Italian masters of the era.

The exchange of letters had a long tradition in the Netherlands, but by the middle of the 17th century, the Dutch Republic experienced a boom in the use of personal correspondence. Various factors contributed to this development, including the global, maritime expanse of the Dutch Republic and the development of a more advanced postal system. Love letters held a special place in this context, especially among the upper classes, and letter writing manuals appeared to offer models and examples for epistolary exchange. At the same time, for elite women in particular, letter writing became part of their broader education. It demonstrated their literacy and learning, and offered a means through which they could participate in wider social and cultural spheres.

To underscore the importance of letter-writing in Dutch culture in the 17th century more broadly, the following provides a brief window into its history. In 1926, the Postal Museum in The Hague received a treasure trove of letters—2,600 with 600 of them unopened-- written in the 17th century. More recently, Leiden University received 1,000 letters from the 17th and 18th centuries recovered from ships captured during the Anglo-Dutch wars. These letters not only offer insight into the language used by people from this period, but also a glimpse into their thoughts, feelings, concerns, sadness, joy, and love.

“Displaying seven objects from the prestigious Leiden Collection at the Timken Museum is a rare opportunity for the community to view important paintings through a completely different lens” states Megan Pogue, the Timken’s executive director. “This revered partnership further underscores the Timken’s place in the international art community as a world-class museum, exhibiting only the finest works from the most celebrated Old Masters.”

The ‘Exchanging Words’ exhibition will include the following paintings from The Leiden Collection with the last artwork listed from the Timken Collection:

Guest Curator, Dr. Lara Yeager-Crasselt joined The Leiden Collection as Curator in 2017.  A specialist in 17th-century Dutch and Flemish art, she earned her PhD in Art History from the University of Maryland and her BA in History and Art History from Vassar College.  In addition to serving as Co-Editor of The Leiden Collection Catalogue, she oversees the Collection’s research and exhibitions.  These include the global exhibition tour that took place in China, Russia, and the United Arab Emirates (2017-2019), as well as more recent focus exhibitions at the Arthur Ross Gallery at the University of Pennsylvania and the Loeb Art Center at Vassar College.

Before coming to The Leiden Collection, Dr. Yeager-Crasselt held positions at the Clark Art Institute, the National Gallery of Art, Washington, and KU Leuven as a Belgian American Educational Foundation Fellow.  She has also served as Adjunct Assistant Professor of Art at Vassar College.  Dr. Yeager-Crasselt is the author of the book Michael Sweerts (1618–1664): Shaping the Artist and the Academy in Rome and Brussels (Brepols Publishers, 2015), as well as numerous articles and contributions to exhibition catalogues on the art of the Netherlands and Italy in the early modern period. 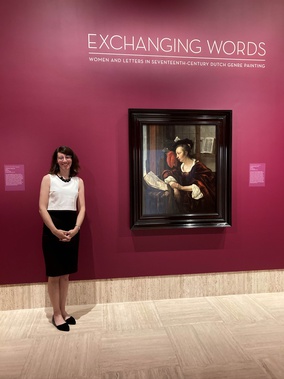