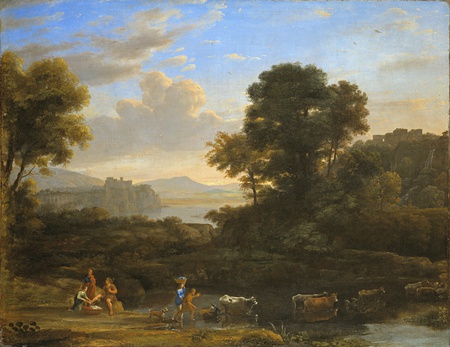 The essential trick of the old pastoral, which was felt to imply a beautiful relation between rich and poor, was to make simple people express strong feelings . . . in learned and fashionable language.

William Empson, Some Versions of the Pastoral (1974)

A broad, slightly elevated view of the countryside, framed by tall trees on either side, includes five figures, a dog, a herd of cattle, mixed together with sheep and goats. Seven birds also glide above the earth in a cloud-streaked sky. Ruined buildings appear on rock outcroppings in the composition’s middle ground, while in the distance a golden-hued river valley gives way to silhouetted mountains. The direction of the scene moves unhurriedly from left to right. The two men and three women in the foreground are dressed rustically. Their identifying attributes are straightforward: the men carry shepherd’s crooks and the women share large baskets of laundry. Two female figures converse with a male shepherd, seated on a rock.  One of these women kneels before him, preparing to wash or, more likely, dry his uplifted foot. Her companion balances the other basket of clothing atop her head, gathers her blue dress to her knees, and starts across the river, steadied by the herdsman to her right. The couple’s limbs, like the bodies of the animals before them, are reflected in the slow-moving current. Everything appears to be in perfect balance.

This mature painting by Claude Gellée (1604-1682)--perhaps better known to us colloquially as Claude Lorrain--is a mainstay of the Timken’s French collections. The artist, who was born to a poor family in Northeastern France, travelled to Italy as an adolescent where he studied with Agostino Tassi (c. 1579-1644) and probably others. Claude went back home to the Vosges region in the mid-1620s, but eventually returned to Rome where he flourished as an artist specializing in grand compositions like this one.  Along with his near contemporary, Nicolas Poussin (1594-1665), Claude’s work came to epitomize a balanced classicism for scholars sorting through the many different forms of Baroque art. Our painting’s generic title, Pastoral Landscape, confers a sense poetic idealization upon its subject, as does its prevailing structure of comforting order. Nothing bad could happen in this self-consciously pleasing view of an imagined harmonious past in the Roman Campagna.

Claude made a good career producing scenes like Timken’s picture. In the mid 1630s, he began keeping sketches of finished works. At the end of his life, either studio assistants or the artist himself, assembled these drawings into a book called the Liber Veritatis (Book of Truth). Today, that album is kept at the British Museum, having belonged to a succession of important British connoisseurs from the early-18th until the mid-20th centuries. Pastoral Landscape appears in that authoritative compilation as “number 103” along with a small study of the sitting shepherd and woman at left. Another pen and ink sketch of the herdsman, laundress, and dog can be found at the Morgan Library in New York, while still other seemingly related drawings of castles and figures are today in the collection of the Cleveland Museum of Art. These studies help us piece together Claude’s methodology: the synthetic pastoral imagery that brought him renown was itself a collection of fragmentary notes. Through these vignettes Claude suggested that the rural countryside was carefree and timeless, when in fact we know that it was full of hardship and subject to ongoing transformations. As the British literary critic, William Empson, suggested about pastoral poetry, 17th century pastoral landscapes were staged fictions, providing viewers with reassurances of stability and prevailing atmospheres of goodness that, in everyday life, were hard to find.