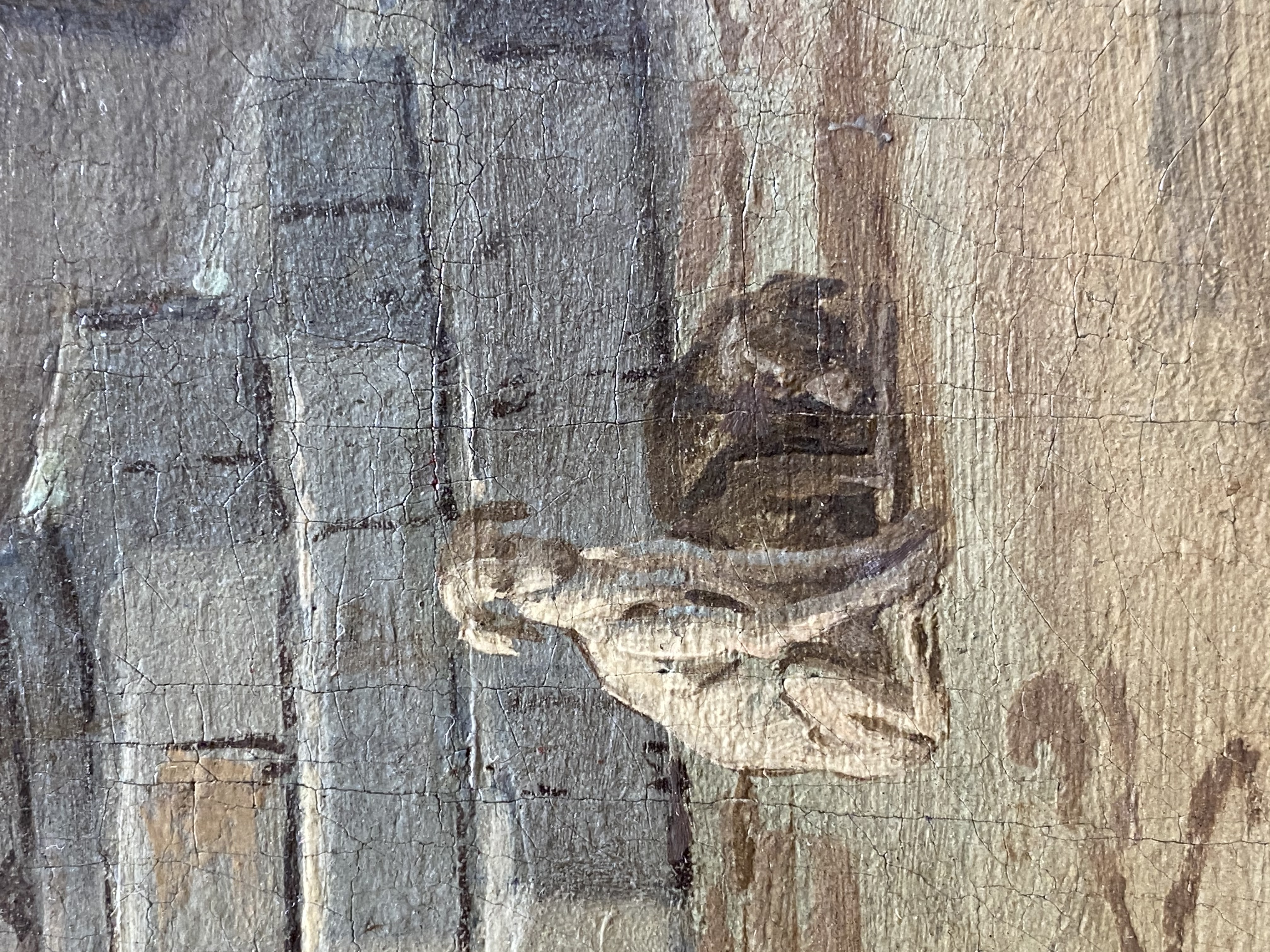 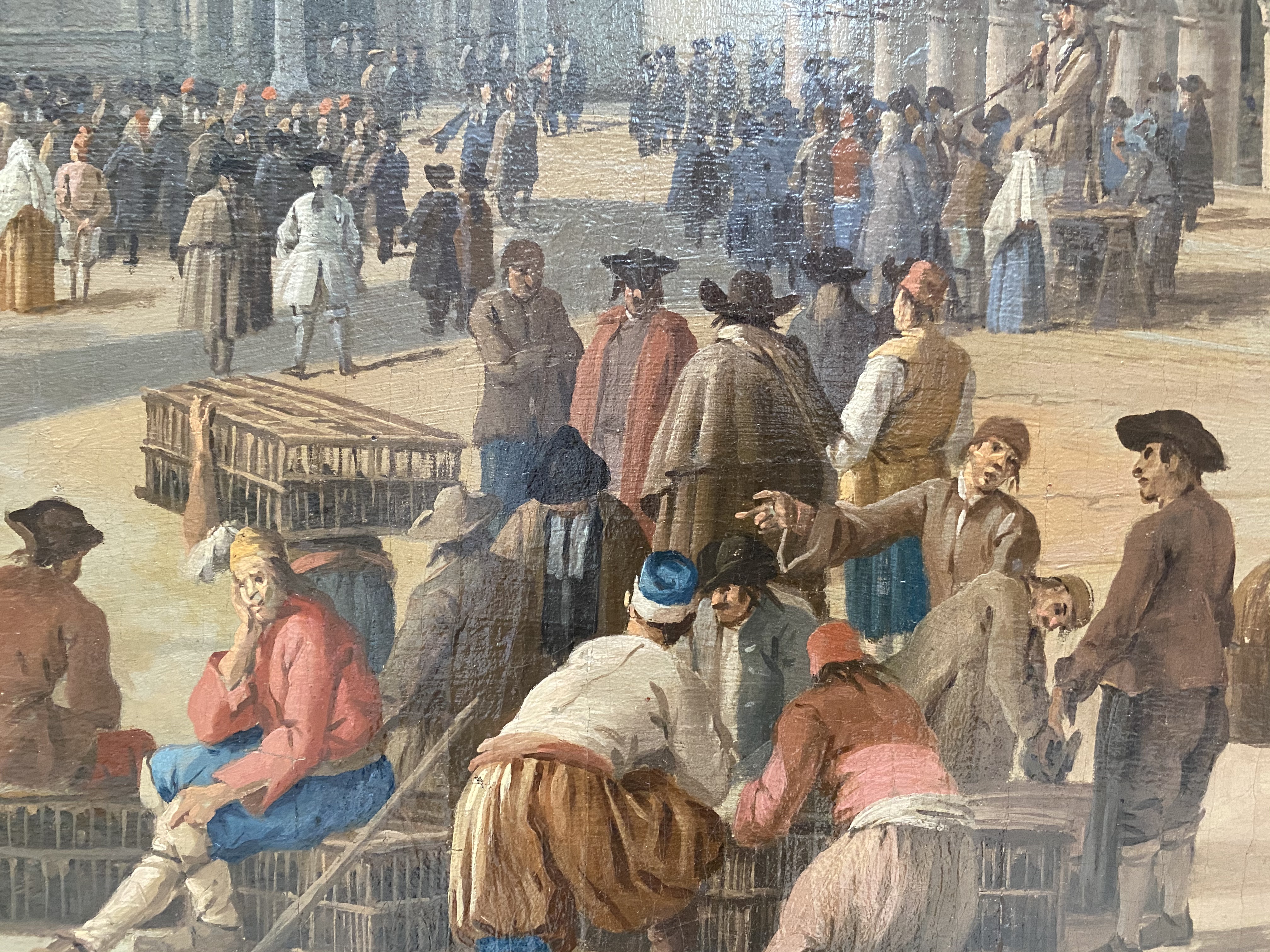 Interest in Italian subject matter spread in Europe throughout the eighteenth century. Scenic views--or vedute--of cities and the countryside were prized by those who were on the Grand Tour. Like college students on a study abroad program, these privileged men and women traveled throughout the continent in search of pre-selected cosmopolitan experiences and general intellectual refinement. Venice, with its storied past and scenic situation, was one of the most appealing destinations for the Grand Tourists. Catering to well-heeled travelers, many eighteenth-century artists soon specialized in painting highly realistic scenes of the city, its lagoons and canals, as well as flattering portraits of the young visitors to the region. These commercially-minded artists gladly opened their studios to the wealthy travelers and made a good living producing pictures on demand, or else allowing clients to choose from vast, existing inventories. The career of Luca Carlevariis (1663-1729) provides an instructive example of this circumstance.

Carlevariis was born into a creative family. His father--Giovanni Leonardo (b. 1614)--was an architect of some note in the province of Udine, northeast of Venice.  By the time he was 16 years old, Luca Carlevariis moved to Venice where, in 1708, he became part of the Fraglia della Pittori--the guild of painters. Membership in this prestigious society was essential to accessing the flourishing art market in Venice, based as it was in individual reputation and satisfying a fickle clientele in transit. At the time he painted the Timken’s work, known as The Piazzetta in Venice, Carlevariis was considered the top painter of vedute in the city. He held that rank firmly until his younger follower, Antonio Canal (1697-1768--better known to us as Canaletto) supplanted him as the preferred painter of Venice among mid-eighteenth-century English and German collectors.

The Timken’s painting offers a familiar perspective: the view of the Piazza di San Marco as seen from a vessel in the Grand Canal. Many of Venice’s primary attractions are visible. To the right we glimpse St. Mark’s Basilica in the distance, along with its namesake column, and the façade of the Doge’s Palace; to the left we recognize the Sansovino Library, the base of the Campanile, and a corresponding column of St. Theodoric. The plaza in the composition’s middle is crowded with citizens, foreign merchants, tourists, and stray dogs. It is a large painting and its purchase would have constituted a significant investment. At one time, this work was thought to have belonged to an English connoisseur named Christopher Crowe, who owned four views of Venice by Carlevariis.  Provenance research has shown that not to be the case, however. For his part, Carlevariis also made highly detailed engravings of similar scenes in Venice for travelers who could not afford a picture the size of the Timken’s.  A nearly identical, still larger painting of the Piazzetta by the same artist can today be found at the Cranbrook School in Bloomfield Hills, Michigan (https://center.cranbrook.edu/discover/things-cranbrook/carlevarijs-piazzetta-venice).  Slightly more vertical in orientation, that canvas shows a bit more of the surrounding architecture, but fundamentally follows the same strategy that Carlevariis demonstrated in our image.  In 2001, the Timken mounted a large exhibition of these views of Venice, curated by Charles Beddington, a scholar of eighteenth-century Italian landscap