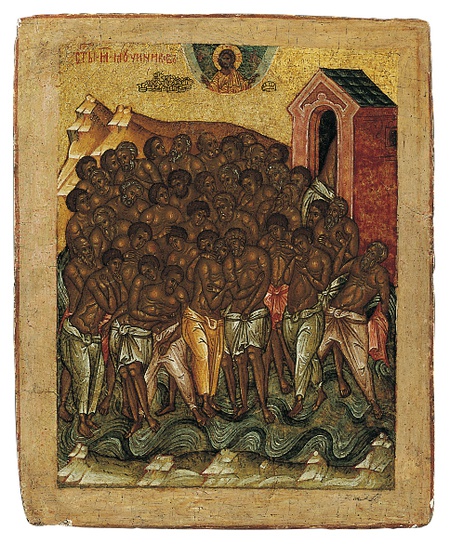 Novgorod School Tabletka, The Forty Martyrs of Sebaste and the Four Men in the Fiery Furnace, 15th century 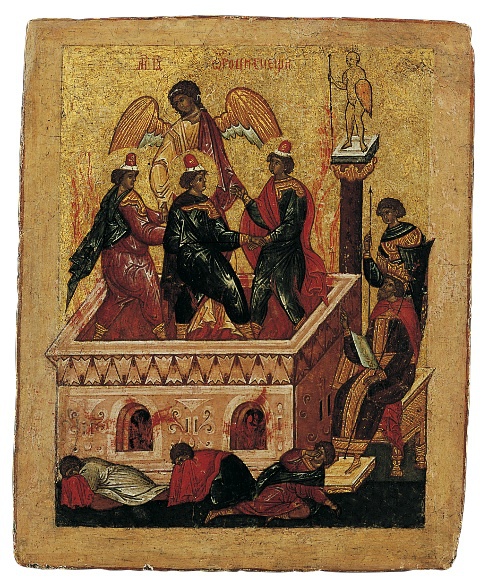 One of the smallest objects that can be found at the Timken Museum of Art is an intricate Russian icon. The one I am thinking of is easy to miss. Typically, it gets shown on a narrow travertine column in the corner of the gallery that has long been dedicated to Amy Putnam’s personal collection of these devotional works.  Although unsigned and inconspicuous--it is less than 10 inches tall and under 8 inches wide--this double-sided representation is actually quite complex and worthy of close study.

On one side of this two-sided work, a 15th-century Russian artist has painted a crowded scene of shirtless male figures in a barren landscape. This scene is known to Orthodox believers as The Forty Martyrs of Sebaste and the story it tells is believed to have taken place around 310-320 C.E.  The thin panel depicts a group of Roman soldiers who, upon refusing to observe the pagan rites of their Roman leaders, are tortured by their leaders in an effort to force them to renounce their faith. Christ, who appears in gold robes in the half-mandorla at the top of the scene, encourages the men to remain united. Among the successive punishments these soldiers endure, they are made to stand on a frozen lake in Sebaste, Cappadocia, which explains the stylized treatment of the icy water beneath their feet. The Feast Day that celebrates their martyrdom takes place on March 10th.

On the opposite side of the thin sheet, we find a contrasting scene. This time, the artist chose an Old Testament narrative from the Book of Daniel that is sometimes referred to as Four Men in the Fiery Furnace. It is another story of over-the-top cruel punishment and it also relates to the refusal to worship pagan deities. This time it is heat, not cold that characterizes the torture of the faithful. The Assyrian King, Nebuchadnezzar, has been provoked by his advisers to cast three just men--Shadrach, Meshach, and Abednego--into a flaming pit because they will not renounce their Jewish faith. Specifically, they won’t kneel before the golden idol that is shown in the composition’s upper right. Instead of perishing in the intense flames, however, the men are seen dancing with a fourth figure who miraculously appears in the furnace with them. Theologians debate whether this fourth presence should be interpreted as an angel, or the son of God: in this instance, the Russian artist treats the figure as an angel. The feast day of Daniel and the so-called Holy Youths is celebrated on December 17th.

The close association of this object with two dates in the Orthodox calendar reveals its function. Especially in Novgorod, where this particular icon was made, artists produced works like this one called tabletki (little tablets). These images were intentionally lightweight. instead of being painted on heavy wooden supports, they were painted on sheets of laminated and gesso-ed fabric; this one is on linen. Tabletki were designed to be easily transported to small easels that would be prominently placed on an altar when celebrating mass for a specific Saint’s day or feast. In the case of the Timken’s small devotional image, we ought to imagine that it was part of a much larger sequence of images that would have been displayed throughout the religious year within a Russian Orthodox church. The artist’s choice of two chronologically distinct iconographies--both in terms of their biblical history and the time of year when they would have been displayed--might seem confounding at first. But such works are joined by shared iconographical messages. Both sides of the tabletka demonstrate the triumph of deep belief over the intolerance of unjust leaders and, like two sides of the same coin, they communicate a common currency in the minds of the faithful.