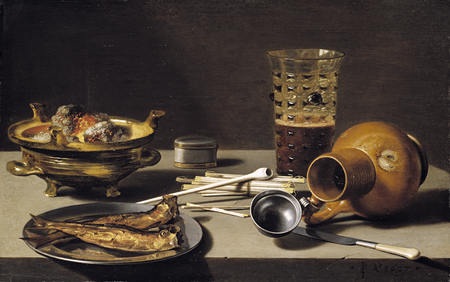 It is hard to prove it just now, but the Timken’s small panel by Pieter Claesz. (1597/98-1660) talks to Jacob van Ruisdael’s (1628/29-1682) canvas in our gallery (see Work of the Week #7). The two paintings hang about two feet apart on the walls of the museum. Both men lived in Haarlem and both were leading artists in their respective genres in that city by the North Sea. Claesz. was widely regarded as the preeminent still-life painter of the early 17th century and Ruisdael occupied the same rank when it came to topographical landscapes, albeit a generation later. Claesz. was born in Belgium but moved North with his family to Haarlem in 1620. Ruisdael was born in town. Claesz. joined the painters’ union, the Guild of St. Luke, in 1621; Ruisdael became one of its members in 1648. The still life specialist died in Haarlem just a few years after the landscape painter left the city for greener pastures in Amsterdam. Haarlem was not so large a place that the two men could have easily avoided each other during their time in this vibrant art center.

What do these works say to each other when they are in dialogue? We know that Claesz. specialized in a type of picture that his countrymen called ontbijtjes (breakfast pieces); Rusidael’s views were known as Haarlempjes--it helps if you know a little Dutch!  Breakfast pieces are comprised of ingredients from an ordinary, informal meal. If you are familiar with other 17th-century still life imagery from the Netherlands--the kind that depicts banquet tables heaped with exotic carpets, monumental vases and tumbling glassware, festooned with fruits and flowers, maybe a squawking parrot--this is not that sort of image. Instead, Claesz. gives us a few simple elements:  smoking supplies, a goblet of dark beer, a brazier glowing with hot embers, arranged around the pewter plate in the foreground.  Across that grey disc a couple of smoked herring are splayed inelegantly. That basic meal hangs over the table’s edge and casts a shadow into our space. Hungry?

Claesz. knew about sumptuous meals, too, and he painted them on occasion. Often those images came laden with moralizing messages: “all of this is fleeting; enjoy it while you can.” The humble spread shown in the Timken’s picture suggests different ideas. There are no glistening oysters, exotic citrus, or carelessly dented silver platters to contemplate here. Whoever consumes this meal doesn’t necessarily need to be reminded that the good life only lasts a little while. This particular example of the ontbijtjes genre represents what ordinary life in Haarlem might have been like for its typical residents. The clay pipe, tapers, and lidded container of tobacco suggest that the likely consumer is male and, however spare, this is all good enough to satisfy him.

Haarlem was a prosperous place in the early Baroque period. Middle-class folk might even have had the means to afford a painting or two. They decorated their narrow, tidy homes with representations like this one. Claesz’s crisp realism strikes a balance between rigorous concern for composition--tight circles, abutting diagonals, and hard edges--and his preference for a coloristically-subdued palette. These qualities appealed to an emerging group of connoisseurs. Those same collectors would likely have found Ruisdael’s depiction of quotidian work in the linen bleaching fields at the town’s periphery equally compelling. Claesz. and Ruisdael shared an appreciation, after all, for the unremarkable. The pleasures they observed may be simple, but they are attainable. These 17th-century works are charged with reassurances about the solidity of things, the genuine-ness of everyday life. They communicated subtle beliefs that the world was in order and that fundamental pleasures would be shared equitably throughout their hardworking community.

Claesz’s Still Life and Ruisdael’s View of Haarlem have plenty to say to each other. Even though the museum has been closed for 7 months now, we might still eavesdrop on their chatter.