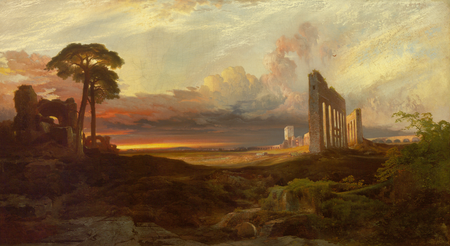 Thomas Moran (1837-1926) cared deeply about artistic legacy. His own self-identification with specific works of art was important to him. Late in life, Moran began pressing his thumb into still-wet oil paint to prove that he was the maker of those representations. Another demonstration of this can be seen in the running list the artist kept of his noteworthy efforts. The English-born landscapist referred to this unique record as his “Opus List.” During the mid-1860s, Moran enumerated 42 works as worthy of this designation. He appended to the document detailed notes about these paintings’ ownership, as well as the prices that collectors paid for them. The Opus List is today kept in the Archives of the Gilcrease Museum in Tulsa, Oklahoma along with more than 200 works by Moran. The manuscript provides an important key to the artist’s private judgments. Occasionally, Moran transcribed “Opus” numbers onto the objects themselves, usually adjacent to his signature, as a means of confirming their significance.

As its formal title and numeric inscription indicates, Opus 24: Rome from the Campagna, Sunset (1867) belongs to this special category within Moran’s broader oeuvre. The picture dates from just after the Civil War, and was the first major work that Moran completed in his Philadelphia studio after returning from the second of his multiple visits to the European continent. This particular sojourn started in Paris and lasted from June 1866 to May 1867. Scholars have shown that Moran passed several weeks in the countryside South of Rome, exulting in the spare beauty of the campagna and studying its traces of ancient civilization before sailing back to the United States via Liverpool. Opus 24: Rome from the Campagna, Sunset is likely based on a highly finished drawing called Rome near the Claudian Aqueduct dated March 6, 1867. That drawing can be found today at the East Hampton Library on Long Island. Like the Timken’s painting it depicts a series of fragmentary aqueducts to the right. These hulking forms lead our eye back to Rome, visible in the distance, just as those structures conveyed water to the city in the historic past. Instead of lizards scrambling over the rocks in the foreground, as we see in the Timken picture, the drawing depicts a solitary figure taking in the vista. If one looks carefully at both the sketch and the painting, the dome of Saint Peter’s Basilica can be glimpsed breaking the horizon line near the works’ compositional centers.

Moran’s moody, romantic view epitomized what many Americans considered to be a classic European landscape. As the decades passed, however, he became more renowned for painting the American wilderness, although wonders of the Old World--especially Venice--remained important to him. Of the 42 works he transcribed onto the Opus List, only about a half dozen depicted England or Continental Europe. The rest are forest scenes set in the eastern United States, works that are indebted to the aesthetic principles of the Hudson River School. As Nancy Anderson has pointed out, by 1867, the artist had not yet experienced much of his adopted country beyond the shores of Lake Superior. Moran’s celebrated practice of painting the western landscape--Yellowstone, the Grand Canyon, and Yosemite--were yet to come.  After his artist-wife, Mary Nimmo Moran (1842-1899), died suddenly, he traveled restlessly. Moran relocated to California with their daughter, Ruth, where he spent the last decade of his life. He settled first in Pasadena, then in Santa Barbara. We know that Opus 24: Rome from the Campagna, Sunset sold in the 1880s for $75.00, and it too eventually came West.  The painting has been in San Diego since 2005, thanks to an ancestor of the original buyer, who donated it to the Timken Museum of Art.